Beckingham's Gainsborough Bowls League team pulled off an excellent victory on 4 August when they beat the league leaders Scotter on Melrose's green to win the GBL Knockout Shield by 95 shots to 71. It was a great all round team performance, and lifted the team after a tottering first half to the season with several key players out through injury, illness and holidays. Beckingham won both Triples by 11 and 10 shots respectively, one of the Pairs by 5 shots, and only lost the other Pairs by 2 shots on the last end. It was indeed a very creditable performance, beating previous Champions Marshalls in the 1st round, and then the 2019 Champions Melrose in the semi final, and completed with this victory over the current runaway league leaders Scotter. The photograph shows the Shield being presented by the League Secretary to the happy and victorious Beckingham team. 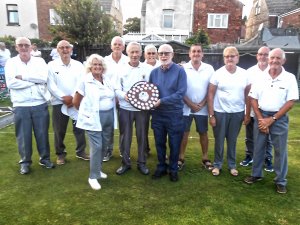